Although it is too hot to spend much time outside now (typical for end of July, early August -- but it's been this way since mid May!), some of my favorite flowers in my yard are beginning to make their show.  I love the cottage look that my blue front door has, with the checkerboard frame around it and the screen door.  The yellow rudbeckia (black eyed susans) are beginning to really come into bloom around the front door and elsewhere in my yard.  In a couple of weeks Obedience Plant will show its pink spires against the yellow, but for now you can see the red blooms of Dragonwing Begonia.  It is in a pot to raise it a bit higher so it can be seen in the border.  It has been a real trooper throughout this hot summer, blooming continuously since I planted it in May. 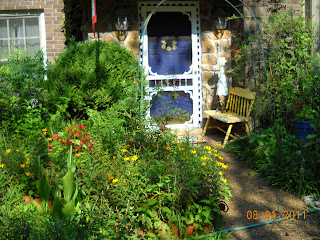 In that same border, bringing in some pink are the rain lilies (also known as surprise lilies, and most often called "nekkid ladies" here in the south.  They are bulbs that send up leaves in the spring, die back to the ground and then after a long bout of heat and drought in July send up a bare flower stalk that bloom with these gorgeous pink flowers after you get a rain storm, which we got the other day. These are "passalong" plants in the southern tradition (see Felder Rushing's book entitled Passalong Plants)-- you mostly don't buy them, people give them to you or you dig them up from old abandoned homesites.  Mine came from the house of the parents of an old friend of mine after they passed away and the house was to be sold.  Some others came from the homesite of a 1920's Mediterranean style mansion that was torn down in 2007 to build a subdivision (which of course has not been built) a few blocks from my house, on what is now called Dogwood Road.  In the 20's the road was called "Hot Tamale Road", which makes me smile every time  I think of it.  Maybe that's why they built that spanish looking mansion there :-)  . 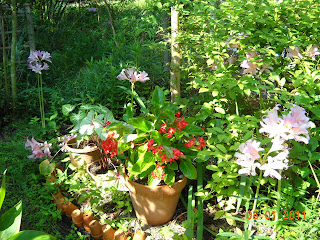 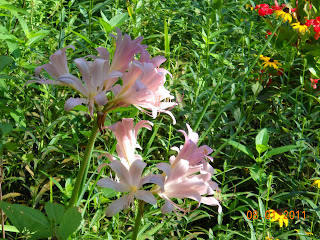 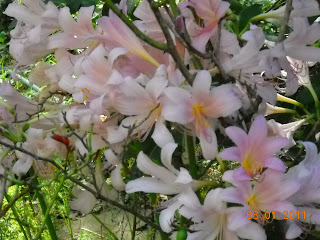 And below you can see some more pink on the other side of the door -- a native plant called Sea Mallow.  That beauty can take the heat and the drought -- comes back every year with no effort and no special watering.  Other than my plants that are in pots and a small vegetable patch, I seldom have to water my front yard, even in the most severe drought. 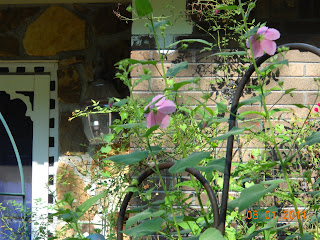 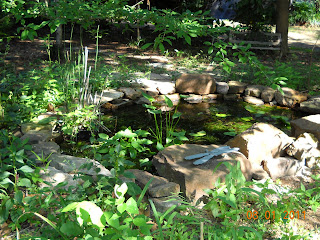 I'm linking to Cielo's Show Off Your Cottage Monday and An Oregon Cottage's Tuesday Garden Party
Posted by Unknown at 7:00 PM

Email ThisBlogThis!Share to TwitterShare to FacebookShare to Pinterest
Labels: garden

I love the photos.

Hello Diana,
Love your garden, I have a few Surprise Lilies - just love their color, their sparkle in the garden! They are wonderful old-fashioned flowers!
Hope you have a great day,
Kathy

Your garden is gorgeous. My cottage garden is shot this year. I hope it will be easier to enjoy soon once it starts to cool down.

I think that's the cutest door I've ever seen! I totally love it. I'd love to sit on that yellow bench and just have a look at all the beautiful flowers you have growing. I'm planning on putting in a frog pond this fall - you'll have to give me some tips. Mine is not going to be as big as yours (I think).

What a nice entry w/ the door and all:)

Lovely garden...thanks for the tour! I have been thinking about getting rain lillies. I like how they bloom.

Beautiful blooms and garden. What an adorable door that is...

I bet it is lovelier to see your garden up close during spring. More plants will be in bloom, which will bathe your garden with their inviting fragrance and visuals. Your garden is the perfect replica of an English cottage garden that complements well with a brick dwelling. 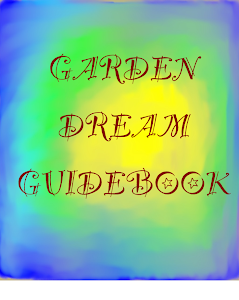 My free Garden Dream Guidebook downloadable ebook, chockfull of beautiful "playsheets" and exercises to help you create a garden that is just right for you, is available here .

And our newest granddaughter

Using this sparkly tool to plan 2013! Promote Your Page Too

In Bloom in My Garden (April)

In Bloom in My Garden (July)

In Bloom in My Garden (August)